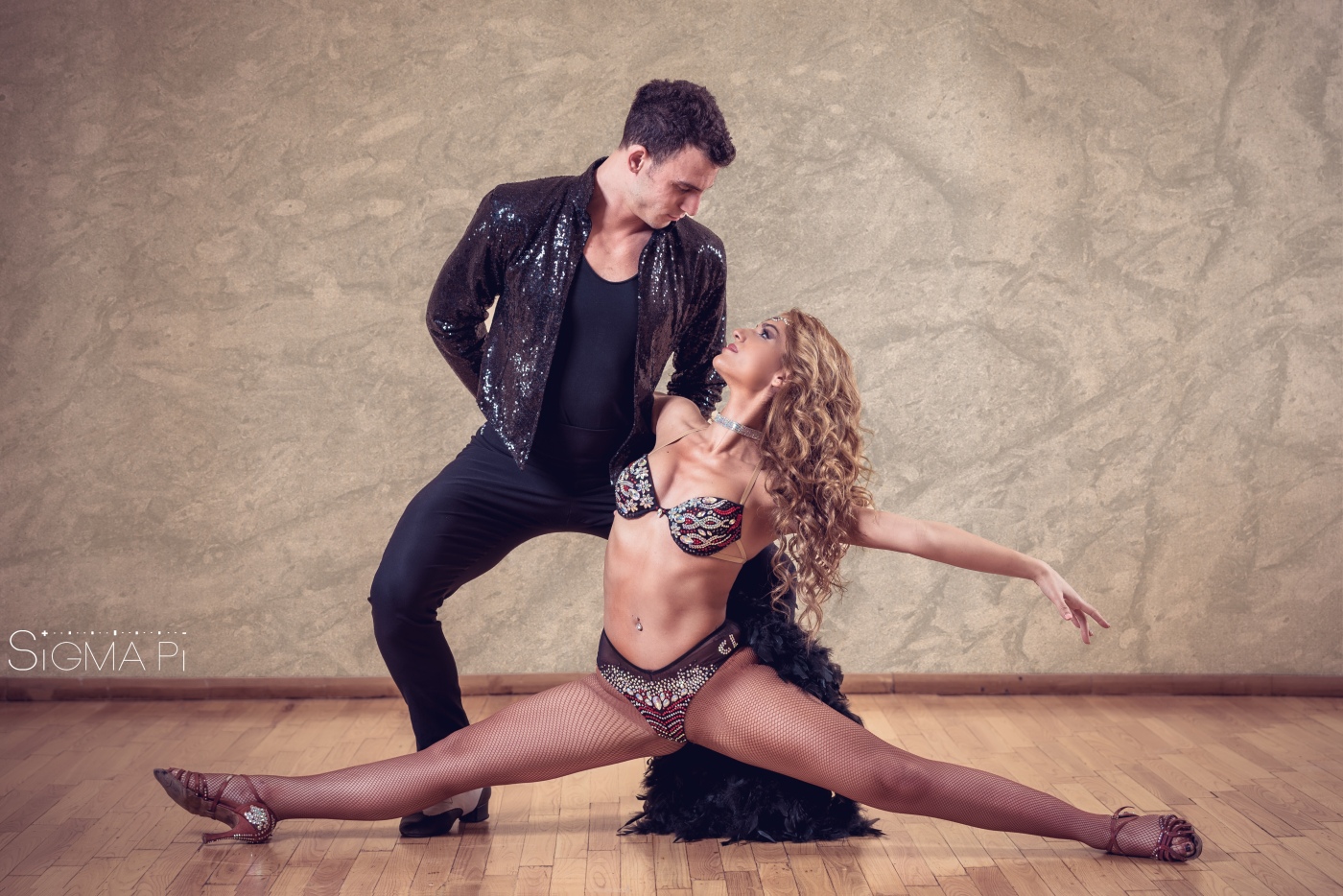 You have certainly heard that salsa does not set any boundaries given that one loves it. Markella Koutsomicháli and Ilias Thermós are the proof of that. They fell in love with salsa six years ago and since then they have been constantly trying to improve. Their effort was rewarded when they won the competition of the best debut partner work in their first appearance as a dance couple at the 13th El Sol Warsaw Salsa Festival.

We discuss with them about salsa, festivals and contests.

How did your love for salsa begin and what were the levels of your progress?

Markella: I did not have any dancing experience; I had just enrolled at a neighbourhood Latin dance school where I got introduced to salsa. I continued my studies at schools which were specialized in salsa and after long hours of practice, I started to improve and I received the proposal of joining the professional team. The next step was teaching.

Ilias: I grew up in Lefkada and there were no schools that taught different kinds of dance there. I had seen some older friends of mine dancing break dance and I wanted to learn, too. In essence, when I moved to Athens for my university studies, I enrolled at three break dance schools in order to learn how to dance. I collaborated with Angel Vizcarra for a fusion salsa and break dance choreography which was to be presented at World Stars Salsa Festival in 2013 at Varna, Bulgaria. Actually, I made my first steps in salsa with that very choreography. I saw Adolfo Indacochea for the first time as a member of the audience at that festival; I was enthralled and I decided that this is what I want to do. I cut down on break dance, I worked on salsa on 2 and after that I joined professional teams until 3 years ago, when I switched to teaching, even if I had teaching experience from break dance.

You mentioned that you have collaborated with and you have been leading dancers in other dance teams. What are the advantages and the restrictions of such collaborations?

I: It depends on your goals. When you start, it is with those collaborations that you learn how festivals work, how lessons and trainings are set up, how choreographies are designed, how to maintain a team. You get lots of information not only about dance, but also about the whole salsa community. However, if you want to build your own identity as an artist, you should try to make it on your own.

M: At the beginning, it helps to have a base but this does not help you evolve on your own. You are always in the shadow of someone else.

Would you say that it was the need for artistic uplift that made you start an independent career and continue on your own?

I: As a matter of fact, artists have the need to create. Since the first moment I started dancing salsa, I have wanted to choreograph something mine. At first you do not have the tools and the necessary knowledge, but as time goes by you learn, you collaborate with other artists and you obtain those tools.

So, would you say it was an easy decision? And that it is a road strewn with rose petals?

M: For me it was not an easy decision to leave the safety of a school and a three-year routine behind. In general, I did not have the experience of doing something of my own, even if it was something from another background. But I highly trust Ilias and that was the cause for it all.

I:  In any case it is hard. Even if you start a business, it is hard in the beginning. To me, the heart of the matter is that unless new couples are formed, this new world that can further develop salsa will not be formed. If there are only 2-3 major schools left, the salsa community will remain stable. However, the creation of 20 new couples will contribute with 500 new dancers to the community.

Do you feel that you need to prove your value as artists and teachers more compared to any other new dance couple?

I: It is surely harder, even if you have reached a good technical level. In order to stand out, other factors play a role, too. For instance, a student will prefer to join a school with a set climate in which they know what to expect. But we do not wish to look at it from a competitive point of view. Above all, we wish to see what we want as artists and we want people to choose us based on this. As far as competition is concerned, there will always be someone better than you – and if there is not a person in your country, there is for sure someone better abroad. Anyway, we do not aim there.

You have recently won a distinction as a debut couple at 2017 El Sol Warsaw Salsa Festival 2017. Are you interested in competitive shows and festivals?

M: It is not our primary goal. However, in case we found a contest which seems interesting to us as far as judges but also recognition are concerned, we would try it again.

I: A reason why we are not exclusively interested in contests is that contests have a lot of restrictions; for instance, the song has to have specific duration, a given number of acrobatics, specific movements that impress the audience. We want to show our work, not necessarily at a contest. The goal is to show the audience what we like hoping that it will like it too, in order to win our own followers.

M: It is a matter on which we disagree with Ilias, since I generally support meritocracy.

I: It depends on what we mean by justice. It is hard to tell who is a good dancer and there are many factors involved in this choice, like who has offered more to the community or whether someone is really pleasant and transmits a certain feeling or organizes good parties or other events and has their own audience.

If the criterion is which the best show in terms of technique is it is possible that there is not always justice involved. However, if we are talking about the whole contribution of an artist, I believe that yes, in general there is justice, with few exceptions.

You are still attending lessons at Milan, at Sosa Academy. Ilias, last year you moved to Milan for three months and under that circumstance you met the Italian salsa community, the schools, the parties and the clubs. Would you like to share with us some similarities and differences with the Greek salsa dancing community?

I: Italians are different in the way they view dance in general. Milan is considered to be the Mecca of Salsa at this moment, since the best dancers are there. What I see on social media is that Italians have a better connection with music. Greeks have a good technical level at partner work, but there is still room for improvement as far as musicality is concerned.

Given this chance and as we are talking about connecting with the music, from your teaching experience do you believe students listen to this music?

Μ: Most students maybe start doing so because it is a trend, girls probably because it expresses femininity, whereas boys do it to socialize most of the times. After starting having lessons, they see they can evolve, that dance can be a part of their lives, and that they can go out for a drink and dance. After that, I believe it is addictive.

I: I believe that it is hard for someone in Greece to identify with this music because it is mainly in Spanish and it takes a long time for the connection to be created. In my opinion, the teacher is the one responsible for transmitting the love for that kind of music. I think that the number one priority is to love the music because dance is in essence the interpretation of music through your body.

Where do you see Greek salsa community in 5 years time?

I: It is a closed community, more underground I believe, but it will not become a mainstream one. There are not many groups and musically the torch has been passed on to other kinds, like reggaeton.

Nevertheless, I still think that even if mainstream is not what salsa will become, it will have a stable presence and the audience will be bigger. I believe the level of dance will improve more in Athens, since there are many good dancers, who are now learners like us. A second wave of dancers will come.

The only problem I can see is that there are no young students. Salsa surely addresses a different audience because it has a certain cost as there are lessons, shoes, parties, festivals involved. Other age groups who maintain the social part of dance can afford this cost.

At the same time, this is off-putting and almost prohibitive for younger age groups from which the new artists usually appear.

Where do you see yourselves in five years time?

Μ: I am personally afraid of thinking about it and I set short-term goals.

I: I would like us to be one of the most famous names in European festivals and I would like the same for our career in Greece.